An Interesting Scene, on board an East-Indiaman, showing the Effects of a heavy Lurch, after dinner

A chaotic scene in a grand cabin on board an East Indiaman. East Indiaman was a general name for any sailing ship operated by any of the English or European East India Companies. The 'lurch' (a pun for 'lunch') of the ship is causing the dining table to slide causing passengers, servants, and children to be tossed around. A crewmember holding onto a cannon on the right side of the print exclaims: 'my precious eyes Tom!!! Here's a smash!!!! -- hold on my hearties!! Hand on by yr eyelids.' The satirical comic is a disapproving commentary on the prevalence of the alcoholic drink, punch. Punch was invented by sailors working the ships for the British East India Company as a beer alternative in the 17th century using local ingredients: rum, citrus, and spices. Although widely popular, critics saw the act of diluting alcohol with water or adding citrus and sugar was an act of folly, ignorance, and greedy waste. 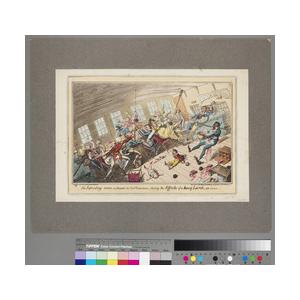