Capture of the Two Top sail Slave Schooner Bologora, By H. M. Schooner Pickle, Lieut I. B. B. McHardy, on the 6th of June 1829 after a Chase of Fourteen Hours and an Action of One Hour and Twenty Minutes within Pistol shot

On the morning of 5 June 1829, while cruising off the northwest coast of Cuba, HM Schooner 'Pickle' discovered a strange sail. She stalked until nightfall and closed in on her. After 80 minutes of action, the Spanish slaver topsail schooner 'Voladora' (or Bolodora) surrendered. She was hauled with difficulty to Havana where they were delivered to the Spanish governor. The print depicts the two vessels exchanging gunfire under a moonlit night sky. The 'Voladora' flies an indeterminate blue, white, and red flag, and her mainmast is destroyed. Beyond her to the left, the British schooner 'Pickle' continues to fight. Inscriptions below the image describe the event and list the relative strengths of the vessels at the time of confrontation. 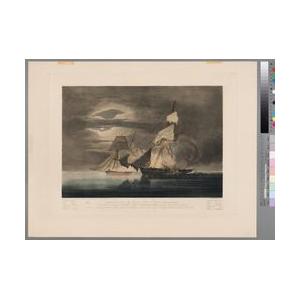