News from America, or the Patriots in the Dumps

A black and white cartoon from the November issue of London Magazine in 1776. British troops under Sir William Howe drove American patriots from Long Island in the summer of 1776. Vice Admiral Lord Howe cooperated with his brother on the sea. This British cartoon depicts the receipt of the news in England. The printmaker has depicted a gleeful government ministry--North, Mansfield, Bute, and George III--standing on a platform proclaiming the news to the people. Distressed patriots, including colonial spporter Wilkes, mourn the event, while a disheveled woman holding a liberty cap sits weeping. To the rear more warships sail off across the ocean. (In actuality, only a few days after the news of Howe's victory was received in London in October, the story of his defeat arrived, but too late to stop the printing of this satire). 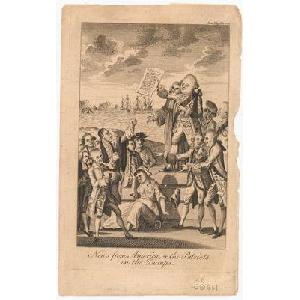