The Amber Whale. Old Whaling captain relating some of his experiences as shown in four whaling scenes, with inscriptions

Monochrome low-gloss paper, possibly a photograph of an original. The scene depicted shows a sea with five rowboats and a large ship, with the cross-section of a spouting whale in the center. Inside the cross-section is depicted a ship's-cabin scene. Men in sailor's hats are seated on bunks and low benches around a bearded man, under a lantern, who raises his left hand as if telling a story. In the bottom of the scene is an artist signature and date: "Wm. E. [Norton?] 187[1,or 7]". To the left of the whale appears the following text, "Swing around and fall over --dead!" To the right, the text, "And bending over his head like a mighty plume went his bloody spout." Below the ocean scene, "And he saw a shadow fall on the boat-- it fell from the old barks sail!" "Then we cut the line, and we cursed the prize as it drifted fast away,". Under this is the title, "THE AMBER WHALE." 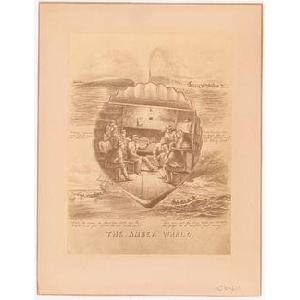