A section of a hand-colored map of east-oriented Palestine divided into the 12 Tribes on both sides of the Jordan River, the shoreline running from Sidon to Alexandria. The missing right side of the map would have shown four burning cities in the Dead Sea: Sodoma, Gomorra, Seboim, and Adama. There are many nonexistent rivers, e.g., a river connecting Jerusalem (seen center, far right) with the Dead Sea. This map is the first half of a large foldout included in Theatrum Terræ Sanctæ by Christiaan van Adrichem that was first published in Cologne in 1590 after Adrichem's death by Gerardus Brunius (George Brun). The full title would read: Situs Terrae Promissionis SS Bibliorum intelligentiam exacte aperiens: per Christianum Adrichomium Delphum. Theatrum Terrae Sanctae is considered the first scientific book on historical geography of the Holy Land. The map is indexed and the index numbers accompany descriptive text in the book. The map shows topography, vegetation, waterways, and routes and illustrates settlements, figures, fauna, ships, and sea monsters. The dotted lines indicating routes are traced over with red ink. 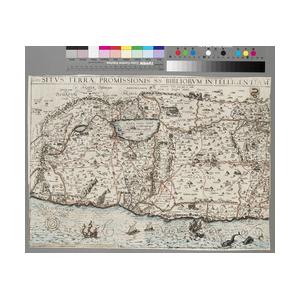 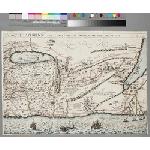