Hand-colored, copper-engraved map of Asia Minor from the Aegean Sea to the Euphrates River that published in Blaeu's Atlas Novus (1640). The map includes Cyprus and some of the Aegean Islands. Relief shown pictorially. During the height of the Ottoman Empire, the Ottomans controlled this entire area with Constantinople as its capital. One of the many naval battles fought by the Ottomans is depicted in the Mediterranean Sea; another vessel and sea monsters decorate the seas. Turban-wearing, winged female figures frame the title cartouch on each end. The distance scale is in a cartouche; in later publications, a man wearing a turban leans against this cartouche with scale. 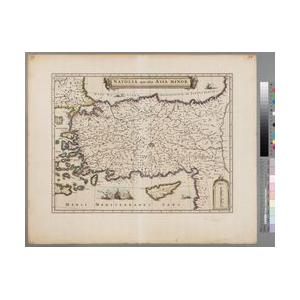