A View of the Whale Fishery

Black and white print depicting men in rowboats harpooning whales, which are depicted as dark half-ovals emerging from the water. There are several outcroppings or small islands of ice around them, as well as three three-masted ships. More ships and a long landmass of ice are visible in the background. Title is placed below the image and reads, "A View of the Whale Fishery". 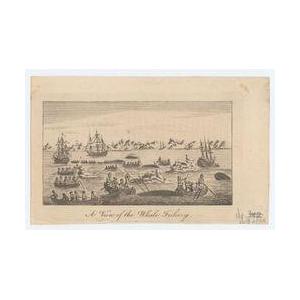