An original panoramic painting of a group of Japanese men shore whaling a right whale. The whale, on the left, is shown wounded and struggling after being pierced with at least three harpoons thrown by men on a longboat partially shown in the center foreground. Each harpoon is tied with a red rope that leads back to the boat. As the whale breaches and spouts an umbrella of water, dramatic stylized waves render the splashing of water and an arch of waves bend over its tail. On the right, the scene continues a profile of a longboat propelled by oarsmen. The two scenes on separate sheets of paper have been glued together to form a continuous scene. The long horizontal format suggests the work perhaps was originally part of a handscroll Traditional coastal whaling, with its colorful rowboats, hand-wielded harpoons, locally produced nets, and a labor force comprised of people from a single village, was a reified source of local Japanese pride and collective self-identity. Through the careful and detailed rendering of the technical mechanics of whaling (signal flags/fans, harpoons, and manner of oaring) the artist exemplifies a realistic view of the provincial folk traditions of whaling before mechanical modernization of the industry in the early twentieth century. 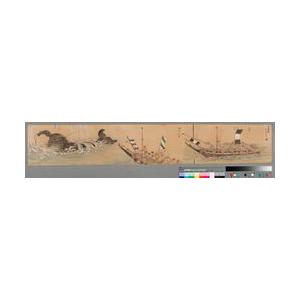