The whale and the three-masted ship.

Etching depicting a stormy sea. In the foreground is a three-masted ship, which sits perilously within the trough of a wave, tilting to the left. This is an extremely dangerous position, and the artist has captured the anxiety of the moment where at any time the ship might swing over and send its crew down to a watery grave. Five others are visible in the background, all tilted at angles, one coming down the crest of the wave. Further ahead in the trough of the wave the back of a whale is visible; drawn along a diagonal, it leads the eye to the ship in peril. Foreground ship flies what appears to be the Amsterdam flag: three horizontal stripes, with three X in the central stripe; however, the central stripe is white and not black as in the actual flag. No artist name or other lettering. 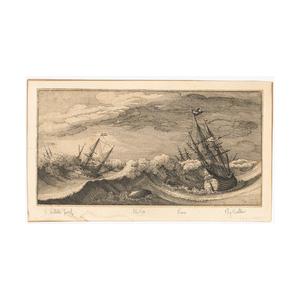