Dangers of the Whale Fishery

Top: Whale's tail in the act of overturning a rowboat. Based on a painting by Louis Ambroise Garneray. Bottom: men in a rowboat attempting to harpoon a cachalot (Physeter macrocephalus). Based on an engraving by Louis Ambroise Garneray with the same title; however, this woodcut is less detailed and only shows a portion of the scene depicted in the original 1835 engraving. The title on the woodcut is "Cachelot Fishery", which is a misspelling of the original title and species name "Cachalot". The top and bottom scenes were previously catalogued as two separate objects (WX 161 and WX 162). 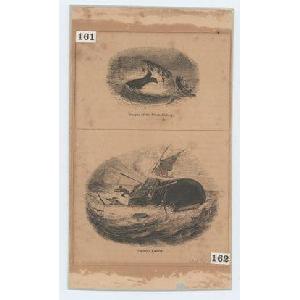