Newspaper clipping with an engraving of a ship going down in the sea, with other ships behind it, and a whaleboat flying the United States flag. Title printed in lower margin. In upper margin, "Entered according to Act of Congress, in the Year 1862, by Harper & Brothers, in the Clerk's Office of the District Court for the Southern District of New York". The Stone Fleet was a collection of whaling ships in poor condition bought by the Northern defense forces during the Civil War, filled with stone, and sunk in Charleston Harbor, with the aim of forming sand shoals and blocking off access to the harbor. However, they failed in this goal. 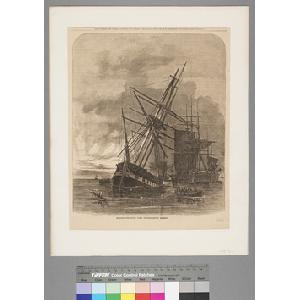 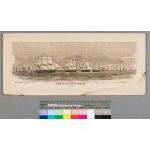 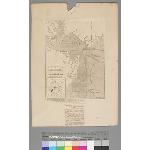 Map of the harbor and city of Charleston, S.C., showing its defenses, and the position of the sunken vessels closing the entrance to the great ship channel, and also the portion of the city lately destroyed by fire
AF-HA-0525
unknown
1841
View