The Nautilus/plunged with Mast and Sails, struck as it moved between the upper/and lower waters in the harbour of Brest. July 1801./The Mast.

Lithograph of submarines for warfare designed by Robert Fulton. The upper view depicts the Nautilus, a submarine firt tested in 1800 and designed between 1793 and 1794 by American inventor Robert Fulton. The title, located at centre of the page explains: "The Nautilus plunged with Mast and Sails, struck, as it moved between the upper and lower waters in the harbour of Brest, July 1801). The lower view features plans for the Mute, with the title featured below lower border. Lithograph from "The life of Robert Fulton" by J. Franklin Reigart, published in 1856 by C.G. Henderson & co. 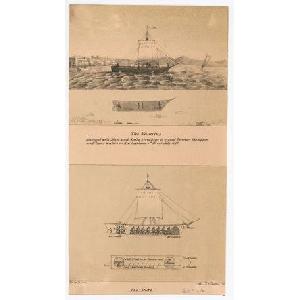 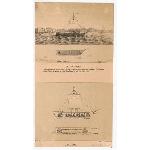