This is a large etching with added green, blue, and red colors. It depicts the English carrack Henry Grace à Dieu (also called "Great Harry"), which was built in 1514 and believed to have been lost in a fire in 1553. In this portrait, the ship is crewed, armed, and adorned with English and Tudor flags. The engraving was made in 1767 by P. C. Canot and T. Allen after an original artwork by Hans Holbein the Younger. The display title at bottom reads: "This Print being the Exact Representation of that Capital Ship the Great Harry, built at His Majesty's Dock Yard at Woolwich in the Reign of King Henry the 8th, Anno. 1514 and by Negligence Burnt Aug. 27th 1553; in the first year of Queen Mary's Reign. Is most humbly Dedicated to all Virtuosi in General, but Particularly those in Naval Architecture: By their most Obedient Humble Servant T. Allen." Another line at the bottom reads: "For a Further Account see Cambden's Britannia Fol. 223. Published According to Act of Parliament May 4 1767." 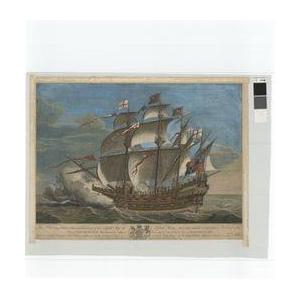 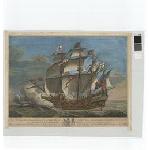