Page from Jacob Cats, "Sinne- en minnebeelden" (1627), with an engraving depicting a cherub standing by a light hanging at a dock, with a ship sailing on a choppy sea under a dark sky in the background. Accompanies a verse in Dutch talking about the importance of shining a light over the world, followed by supporting Classical and Biblical quotes. On verso, an engraving depicting a cherub tying a net up between two trees, over a river, followed by verses in Dutch and Latin. 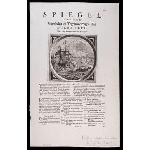