In September 1844, a group of five of the newest brigs, called the Experimental Squadron, were brought together to conduct sailing trails to test their new ship designs against the older ships, such as the 'Cruiser' (1828), the 'Pantaloon' (1831), and the 'Waterwitch' (1837), which were then considered the Navy's best performing designs. Under the Captain Armar Lowry Corry, 14 runs were made under varying conditions, and a detail report produced. The results were inconclusive. However, the newer designs were generally considered improvements. In this print, the Experimental Squadron brig, 'Mutine,' sails alongside other ships of the Squadron. She is the largest ship in the left middleground with her port side visible. A smaller, single-mast sailing vessel if in sails perpendicular towards the 'Mutine.' The ships are identified as part of the Squadron by the text on the top margin, and each brig is identified by the corresponding names below the image. 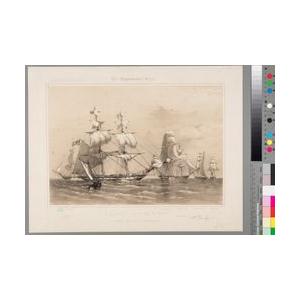 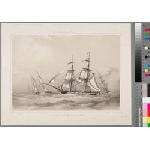 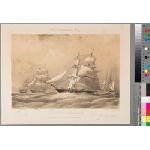