A trimmed lithograph depicting the cutter yacht 'Arrow,' owned by Thomas Chamberlain, in a race for the Prince Albert's Cup on 15 August 1854. She is about to round the distance boat moored off Yarmouth to head back to Cowes. The 'Arrow' claimed victorious despite her competitor, 'Julia,' being the favorite to win. A steamship is in the background to the right of the yacht. The now trimmed borders would have had the publication detail and descriptive title. 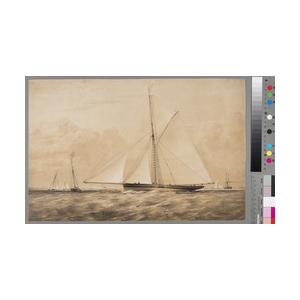