The first lithograph of a series on the Naval Review at Spithead published October 8, 1853. The display of the British navy represented British progress and power right before the Crimean war. Includes a key along the bottom edge of the image for the ships depicted, e.g. Flagship Duke of Wellington is near the center of the picture. The image is colored and the title is from the printed inscription. 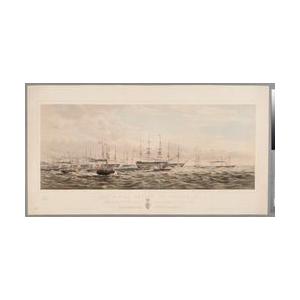