tinted aquatint of the paddle steamer, Qeen of the Isle, that was part of the Isle of Man Steam Packet Company. The vessel is depicted leaving Douglas Pier at the Isle of Man through turbulent waters. The symbol of the "three legs of Mann" conjoined at the thigh is seen on the side of the steamer's paddle. The lithograph is after a painting by the Liverpool marine artist, Samulel Walters, who was an internationally reputable artist in ship portraiture. 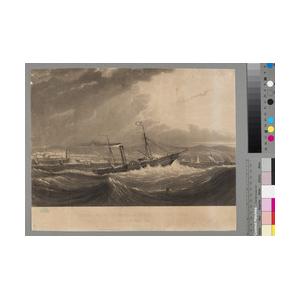