The Cutter Yacht, Talisman, (87 Tons) R. Y. S. sailing the Great Match with the Corsair, from Cowes round the Eddystone and back, Octr. 1842

A lithograph depicting a race between the yachts 'Talisman' and 'Corsair' in choppy waters and rounding the Eddystone nearly together. The 'Corsair,' in the center, leans on her starboard side as a wave crashes on her deck. 'Corsair' won the race by 1 minute and 30 seconds. Owned by Mr. John Congreve, Esq., the 'Corsair' was one of the most notable cutters of its time. Her chief competitor was the 'Talisman,' which belonged to Mr. Robert Meiklam, Esq. 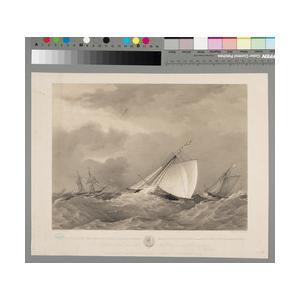 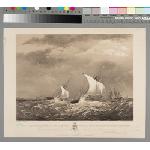