A tinted lithograph of a three-quarter, starboard view of the experimental frigate HMS 'Pique.' Designed by controversial Chief Surveyor of the Navy, William Symonds, she was the first of a new class of medium-sized frigates. In the 1830s, she was part of the Experimental Squadron, which were groups of old and new ships sent out in trial cruises to test new techniques of ship design, armament, building, and propulsion. In the print, the 'Pique' navigates to the right near a hilly coastline. 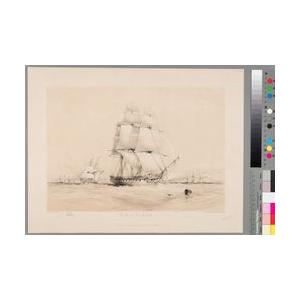