A starboard-side view of the frigate 'Vindictive' of the British Royal Navy on a port tack. The direct light onto the ship from the sun's position in the upper right accentuates the sails full and pulling. Built as a 74-gun, third rate ship of the line, the vessel was modified in 1832 as a 50-gun fourth rate frigate. The outlines of two tall ships are visible in the right background. 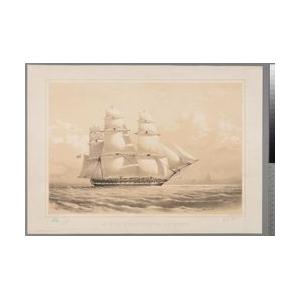