To Alexander Grant Esq. of Carnousie This Portrait of the Clipper Schooner, Hellas, is respectifully dedicated by W. W. Brierly

Starboard view of the 'Hellas' sailing in the center of the image with other vessels in the distance. A small rowing boat is docking beside the 'Hellas'; a man at the head of the rowing boat grabs onto the ladder hanging on the broadside. A small patch of mountainous land is visible in the left background. A dark indistinguishable object, perhaps wood debris, floats in the foreground. According to the National Maritime Museum in Greenwich, London, the Hellas disappears from Lloyds Register after 1841, although she had been recorded there from 1836. Her Commander's name is shown as "A. Scanlin." This is likely to have been one of Brierly's earlier pictures. Reference: National Maritime Museum, Greenwich, London. PAF7721 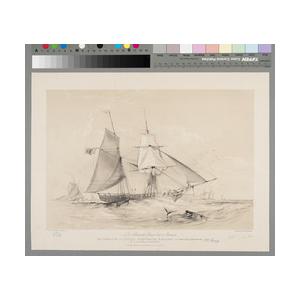