Perspective view showing statuary groups and visitors at base. The beacon is inscribed "TO THE GLORY OF THE AMERICAN PEOPLE". "All the forces which have shaped the American nation marshaled themselves in the form of a glorious monument, the symbol of progress and grandeur." -- Désiré Despradelle Towering 1500 feet, far higher than any other structure of its time, and unsurpassed in its conception of architectural grandeur, Professor C. Désiré Despradelle's "glorious monument" was his Beacon of Progress, inspired by the splendor of the 1893 Columbian Exposition in Chicago. Despradelle visited the exposition just after arriving at MIT from Paris, where he had distinguished himself as a student at the Ecole des Beaux-Arts. Recruited to head the Department of Design, he taught at MIT for 19 years until his death in 1912. During this time, he had a profound impact on architectural education in America, particularly as he was a direct link between the venerable Ecole curriculum and MIT, the oldest academic program in architecture in the country. The Beacon of Progress was executed in a large series of studies over six years' time and was exhibited at the Paris Salon in 1900, where it received a gold medal. MIT Architecture Department Head F. W. Chandler praised Despradelle's design for expressing "a quality of noble poetry." [MIT 150 Exhibition label text]

A tower of great height is suggested in this painterly rendering by a shroud of clouds, Lilliput-like figures on the ground, and a low horizon line that enhances the monumentality of the image. These were pictorial devices derived from centuries-old imagery of the Biblical skyscraper, the Tower of Babel. The centerpiece of Despradelle's prize-winning entry at the Paris Salon of 1900, this masterful drawing was exhibited at the Palais de Luxembourg as one of a handful of examples of modern architectural drawing. Returned to Boston for Despradelle's memorial exhibition in 1913, it was eventually donated to MIT. A contributor to the distinguished architectural journal Pencil Points, writing nearly thirty years after this drawing was completed, highlighted Despradelle's accomplishment as an architectural artist: "For sheer imaginative power and sustained conception throughout the long process necessary to its presentation, I know of nothing in the archives of architectural drawing equal to the series of drawings he produced for that ideal monument."
CDD.BP.03 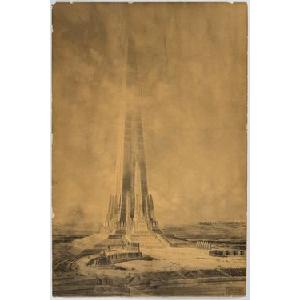 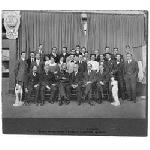 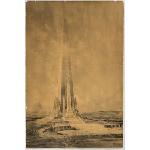