A copy of 'Whaling Grounds in the Arctice Ocean' by Abraham Storck (1644-1708), which is now held at the Rijksmuseum. Depicts a Dutch whale hunting scene in the arctic. A group of men fight polar bears in the left foreground and two whaleboats flank a harpooned whale. The scene highlights the dangers of arctic whale hunting as the crew battles against icebergs that could potentially crush their ships and wild animals, such as polar bears and walruses. 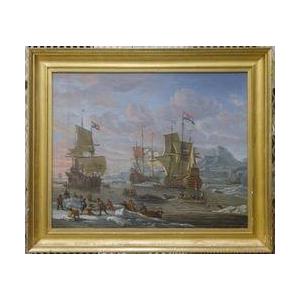