Newspaper clipping with a woodcut of the New York Yacht Club's first clubhouse, on the Elysian Fields, with trees, a river, and an American flag outside. Below is printed the title and a passage of text in two columns discussing the Club. It begins, "Our engraving gives a very fair representation of the club house of the New York Yacht Club, situate at the romantic spot known as the Elysian Fields, Hoboken, opposite New York City." Text on verso is faintly visible through paper. 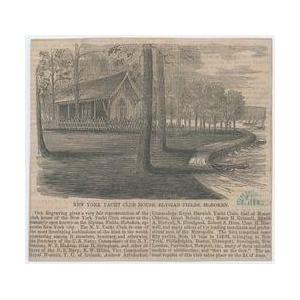