Plate 8 of 'Historia de la marina real española episodios maritimos' lithographed by J. J. Martinez and others. The print depicts indigenous workers carrying one of the 13 prefabricated brigantines across mountains to the Lake Texcoco where they were reassembled. Following the leadership of the Spainiard Hernán Cortés, a coalition army of Spanish forces and native Tlaxcalan warriors captured the emperor of Cuauhtemoc and Tenochtitlan, the capital of the Aztec Empire. Cortés elaborately planned the conquest of Tenochtitlan for maximum theatrical effect. To lay siege to the city on a lake, he had 8,000 carriers transport prefabricated brigantines to the Lake, dug a canal, and deepened the lake for a successful launching. In the print, indigenous men, identified by their loincloths, carry a hull of a ship on stilts and build ships. A lake is seen in the valley in the background. Spaniards wear traditional European armor and dress, ride horses, and carry guns. One Spaniard appears to each supervise a group of indigenous men working on different projects. The complete digitized bound series can be found at the Biblioteca de Catalunya: http://mdc.cbuc.cat/cdm/ref/collection/materialsBC/id/5755 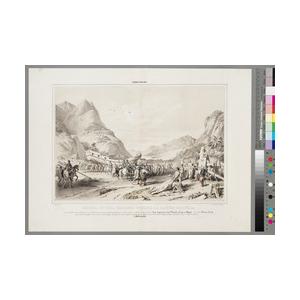 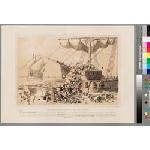 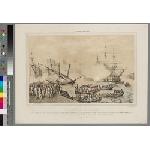 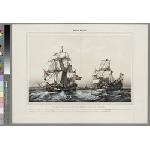 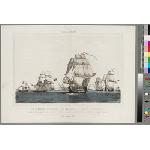