The triumphal entry of the King Henri III of France and Poland to San Nicolò on the Venice Lido on 18 July 1574. Doge Alvise Mocenigo and the Signora met Henri and his entourage in several galleys in Murano then escorted him to San Nicolò where they were welcomed by the patriarch of Venice, Giovanni Trevisan and the clergy. The triumphal arch and the loggia constructed in the King's honor is prominently portrayed and labeled at the top center of the print. The print depicts the moment when Henri was led through the triumphal arch to the altar of the loggia under a baldachin. Henri's name is labeled next to his figure. See Korsch, Evelyn. "Diplomatic Gifts on Henri III's Visit to Venice in 1574." Translated by Nicola Imrie. Studies in the Decorative Arts 15 (2007): 83-113. 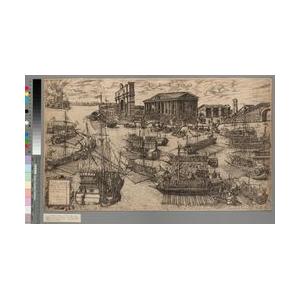