Black and white cartoon of a young harpoonersman aiming his harpoon at a spouting whale marked "CUBA". In the bottom right corner, a bearded man in sailor's clothing, embellished with stars on the collar, turns his head behind him to look at the young man. The text reads, "WANTED--A WHALER." "OLD SAM.--Now, then, young 'un, put it in, or them darned English fellers will have her." Printed old label text filed with this woodcut: Spain's ten-year struggle to crush insurrection in Cuba (1868-1878) was a matter of grave concern to the United States. The government did not favor either annexation or intervention, but popular feeling was strongly against Spain. Also, in the summer of 1872, when this cartoon was published, the relations between the United States and England were strained because of the impending settlement of the Alabama claims, which had arisen out of the Confederates' use of English-built privateers during the Civil War. 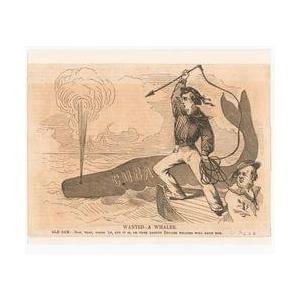 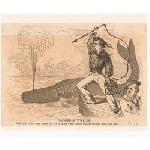 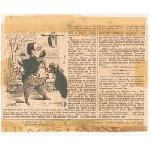