Photograph of an 1817 engraving. The engraving depicts a giant sea monster, with a body like an elongated centipede and a head resembling an animal skull. In the background are ships and a view of Cape Ann. In the foreground is a small rowboat. On the engraving, below the image, is the caption, "MONSTROUS SEA SERPENT AS SEEN AT CAPE ANN". There is an inscription on the photograph in black ink: "[illegible] Year & Allan Forbes from Sam [Sho?]th[a?]yham. 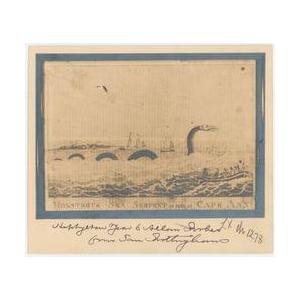