A colored drawing inspired by two illustrations in Chapter IV of Francis Allyn Olmsted's published journal, Incidents of a Whaling Voyage (New York: D. Appleton, 1841), "The Attack" (with the same title) and "The Dying Whale." In this scene, a crewmember stands on a whaleboat and is about to plunge a harpoon into an overturned whale. In the distance, another whale overturns a whaleboat. In Olmstead's book, the illustration titled, "The Attack," does not look like this drawing. Rather, the depiction of the overturned whale with the harpoon rope tangled around its open mouth and one main whaleboat is closer, though not the same, to the illustration titled, "The Dying Whale." Olmsted recorded his experiences as a passenger on the whaler North American during a voyage from New London, Connecticut to Honolulu. His journals in two volumes described his stay in Honolulu and his return voyage with several missionaries to New York on the cargo vessel Flora. The journal, revised and supplemented with new illustrations, was published as Incidents of a Whaling Voyage. Although at the bottom margin of this drawing, it is inscribed, "Drawn by F. A. Olmsted, 1841," it is more likely that this drawing is a 20th-century imitation. 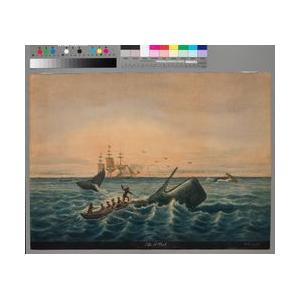 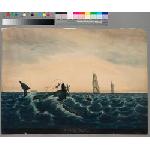