A View of the East India Docks

A broad view of the British East India Company's docks (London) with shipping. in-plate description at bottom: "The East India Docks are solely for the accommodation of Shipping employed by the English East India Company in London. They consist of two spacious basons; on the quays of the largest of which all the produce imported by the Company from the East is unloaded; & in the other all the all Vessels that are outward bound receive thir cargos. The dimensinos of the fomer is 1410 feet in length by 560 in breadth, & will contain eighty four Ships of eight hundred tons each; the latter is 780 feet in length by 520 fet in breadth, & the depth of both is 26 fet: the whole superficial extent of water, including the entrance, being thirty acres & a half. The smaller bason is an enlargement of one formerly in the possession of Mr. Perry, but the other was constructed by the East India Dock Company: & was begun in the month of August 1803 & open'd in August 1806. The East India Docks may be considered as placed at the eastern limits of the City of London. A chain of connected streets already extend to the Village of Blackwal, adjoining to which those great marine depots are situated. Many new streets are already begun in its vicinity, the whole plain is scattered with buildings, used either as Dwellings or Manufactories, & the several newly constructed roads, leading to these & the West India Docks will doubtless at no distant period be the future chief streets of this part of British Metropolis." 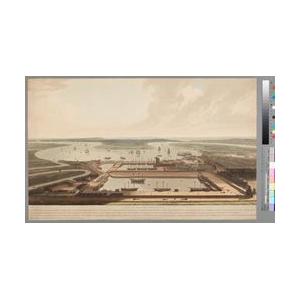