Considered one of the most important photographs of all time, Harold Edgerton saw this particular image (taken January 10, 1957) as just one of many in his life-long quest for the perfect coronet. For example, he took a similar image in 1937 in black and white which would be published in his first book "Flash" in 1939. Edgerton's lab notebook entry for that day describes the details of how he conceptualized this particular image. Edgerton's son Robert described the creation of this image this way: "A beam of light and a photocell was used in both examples to trigger the flash after an adjustable electronic delay. A dropper produces a small drop following the main drop of liquid from the neck pinching off in two places. This small drop following the main drop is seen in the photograph of the splash made by the main drop. The drop of milk is splashing into the thin film of milk that has formed on the surface from the previous drop of milk. The shape of the coronet is very dependent on the thickness of the film of milk, the size of the drop, and the height through which the drop has fallen. Milk was selected as the liquid because it is white and translucent and attractive to photograph. Photographing splashes has a long history in particular see Worthington's book on that subject using sparks as a light source and using two drops, one as part of an electrical switching arrangement to achieve the timing. My father's contribution was his development of the electronic flash technology so that it had enough intensity for color photography and still have a short enough exposure time to have a crisp image of the moving milk droplets. He also devised the triggering scheme and delay used to capture this critical moment in the evolving shape of the splash." 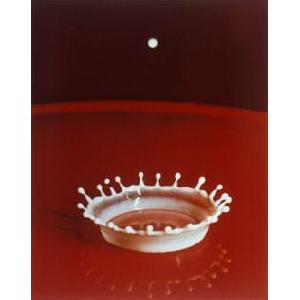 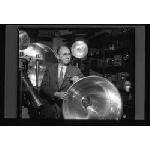