Side view of the Royal Charles built 1673

Stern and starboard side view of the British first-rate ship of the line, 'Royal Charles,' built in 1673. Highly ornate, crests, human figure sculptures, and poop-lanterns decorate the stern. The head of the bow is elaborately modified with a man and horse performing the classical dressage pose, the courbette. The 'Royal Charles' was designed to carry 100 guns. She served in the First and Second Battles of Schooneveld and the Battle of Texel during the Anglo-Dutch Wars. The masts are not depicted. The collector, Arthur H. Clark, used this print from his collection to illustrate his book 'The History of Yachting, 1600-1815' (New York & London: G. P. Putnam's Sons, 1904), 95. 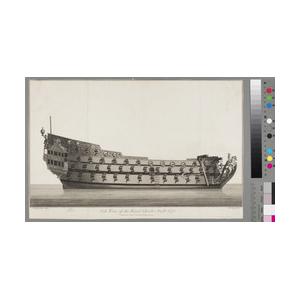