The Creation of ye world, or the six dayes worke. Genesis I.

Monochrome engraving depicting the Garden of Eden with the animals, including two whales--one spouting, and one not--the sun and the moon, and the light of God, labeled "Fiat Lux" Verso is captioned "2) The Creation of Adam. Genesis 1." and shows Adam, nude and beardless, and with his hands clasped in prayer, among the various animals in the Garden of Eden. Above, on a banner held up by two cherubs, the following dedication (with a coat of arms) : "To her Sacred Majesty Mary by the Grace of God Queen of England, Scotland, France and Ireland, &c. dedicated by yo. Matys. most obedient Subject Richard Blome" According to J.C. Walter's "A History of Horncastle", this plate comes from a 1701 "History of the Old and New Testaments, gathered out of sacred scripture and writings of the fathers, a translation from the work of the Sieur de Royaumont", and many plates are dedicated to British and other notables, including Katherine, Queen Dowager of England; Ann, Princess of Denmark; and "various Lincolnshire worthies". The handwritten inscription "MARY 1662-1694" specifies that the dedication was thought to refer to Mary II of England, the Protestant queen and wife of William of Orange. The recto and verso were previously catalogued as two separate objects (LX 1401 and LX 1402). 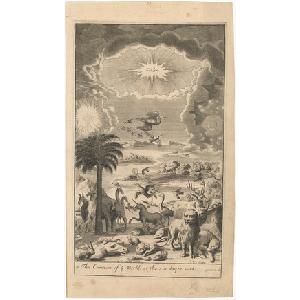 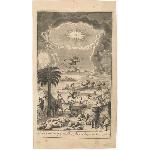 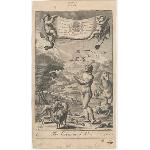 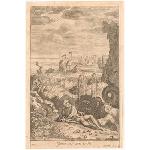