A Whaling Scene at Iki

Two objects mounted together. Part of Hiroshige III's series "Pictures of Products and Industries of Japan", published in the Meiji period. His series of images depict local industries across the country. Subjects include farming, fishing mining and harvesting natural resources. Top image (AF-XJ-0402), "Pulling Up a Whale in Iki Province", depicts 16 fisherman hauling a whale to shore. Bottom image (AF-XJ-0403), "A Whaling Scene at Iki", depicts whaling off the Iki Islands. Fisherman in small boats surround the whale as it surfaces, sending up a spout, getting close enough to fire harpoons into the creature. 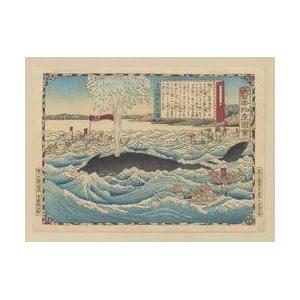 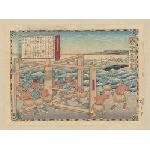