This mechanical mouse (1.25" x 1.25" L: 3.5" with tail) finds its way to the goal and remembers the path taken. Its "brain" is relay switches underneath the maze. Howard Gardner said Claude Shannon's MIT master's thesis was "possibly the most important, and also the most famous, master's thesis of the century." If you've used the word "bit" (for binary digit), then you have an idea of what he meant. More important, Claude Shannon's early ideas proved key to the redesign of the telephone system and the development of the modern computer. During World War II, he met the famous British mathematician Alan Turing. That exchange resulted in Shannon's pioneering analysis of cryptography systems.(A declassified version of his original 1945 memo was published in 1949.) Most notably, Shannon's 1948 paper, A Mathematical Theory of Communication, was hailed as "the Magna Carta of the information age." This digital pioneer had another extremely imaginative and playful side. Shannon loved to build mechanical toys for his family. Theseus was more than an electromechanical maze in which a mouse blunders around looking for the "cheese." Built with his wife Betty, Shannon's maze was an elegant display of telephone switching technology. When you make a telephone call, information travels the telephone system labyrinth to find the right telephone to ring, just as the mouse in this maze searches for its cheese. [MIT 150 Exhibition label text]

In December 1949, shortly after their marriage, Betty Shannon gave Claude Shannon a Meccano set for Christmas. In short order he had built a mechanical turtle with an antenna, which would run around a room and back away after encountering obstacles. The original mouse for Theseus was a descendent of that turtle, about an inch and a half square. Parts of the top maze for Theseus were machined at Bell Labs, but the circuitry was built at home on the living room floor. Betty Shannon, who was working as a technician at Bell Labs' s microwave research lab, did most of the wiring. A metal maze with walls whose position can be changed sits on top of a box; inside the box, a plotter-like electromagnet controls the movement of the mouse, and a series of relays calculate its position and remember successful and unsuccessful paths. Betty Shannon recalls that Claude liked the comparison of the machine to the chess-playing automaton built by Wolfgang von Kempelen in the 1760s: although the mouse appeared to be moving and making decisions, the brains of the system were really inside the maze, not the mouse. Other versions of Thesus may exist; Bell Labs built several for demonstrations, including the one with a wood case and mirror featured in a promotional film which connects the mouse s search for the cheese with a telephone call s progress through the switching system. After its demonstrations at Bell Labs functions, the machine continued to be used for experiments: Andrew Shannon recalled using it in elementary school science fair projects with real mice. Since the walls of the maze were low enough for live mice to jump over, the metal maze had to be chilled before use, so that the mice would prefer to keep moving instead of jumping over the sides. In the mid-1980s, Claude Shannon attempted to repair damage to the machine from years of disuse and several moves, but was unable to restore it to a working condition. In addition to the maze, its power supply, a magnetic mouse, and two cheeses, the MIT Museum also holds original wiring diagrams and calculations, as well as photographs and film footage of Theseus in operation.
2007.030.001

Gift of Mary Elizabeth Shannon on behalf of the family of Claude E. Shannon 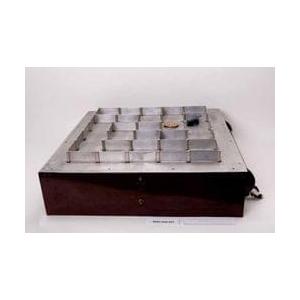 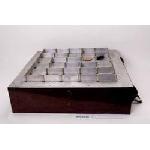 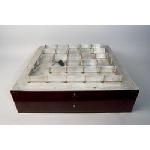 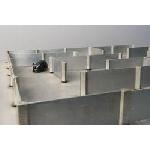 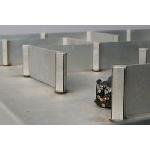 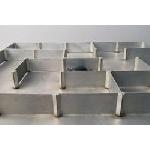 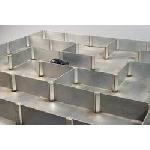 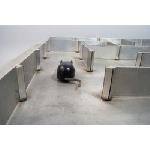 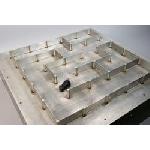 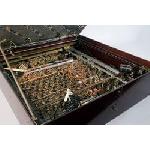 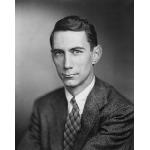