This startling image first illustrated a lecture by Edgerton entitled "How to Make Applesauce at MIT." Moments after the apple is pierced by the .30 caliber bullet, it disintegrates completely. What is so surprising is that the entry of the supersonic bullet is as visually explosive as the exit. (from "Stopping Time" (1987), p.126) The duration of the flash in this photo is about 1/3 microseconds. The amount of light given off is small enough that the exposure must be made in total darkness. To trigger the flash at the proper moment, a microphone, placed a little before the apple, pickes up the sound from the rifle shot, relays it through an electronic delay circuit, and then fires the microflash. The careful lab preparation heightens the anticipation, but never quite matches the surprise and wonder that our eyes transmit to us, as we hold onto the after image in the dark. At that point, we know exactly what the flash illuminated and what the film, hopefully, recorded. This picture was made with an EG&G Microflash. At the heart of the microflash is a quartz or Pyrex tube, around which are wrapped two electrodes coming from from the capacitor. Through the process of conduction, a high voltage spark sent into this tube causes an arc of electricity to jump between the electrodes on the outside, resulting in a bright flash. Unlike most electronic flash lamps, which are filled with xenon, the microflash uses plain air. This choice produces a much shorter afterglow from the flash than a xenon lamp. When this flash is triggered, the arc displaces the air around it, much like lightning in a summer storm. And the microflash produces its own thunder, too, like a gun shot. To quiet the noise, a glass tube, sealed with a rubber cork at the open end, encloses the quartz tube. For bullet photography, a reflector is plaved around the assembled lamp to concentrate the light in one spot. 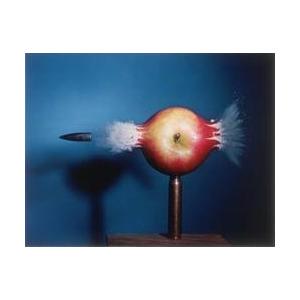 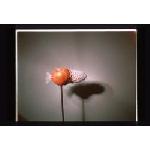 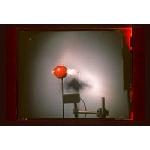