The Burton Cross Office Building is a large granite clad, steel framed structure comprised of a nine-story, ten-bay recessed central block flanked by six-story, four-bay blocks from which five-story, six-bay wings extend to the north and south. As originally designed, the principal entrance was centered on the west elevation of the recessed main block with secondary entrances in the south and north wings. During the recent renovation of the building, a glass enclosed primary entrance was created on the west elevation facing the back side of the State House, and the grounds between the two buildings have been redesigned. Designed by the Portland architectural firm of Miller & Beal in association with the Boston firm of Desmond & Lord, the State Office Building (as it was originally named) was built in response to a shortage of office space in the State House. Construction began in June of 1954, and it was completed in the Fall of 1956. The building underwent a complete renovation in 2000-01, after which it was renamed the Burton Cross Office Building in honor of the governor under whose administration it became a reality." From NRHP application for Capitol Complex Historic District, Augusta, Maine. 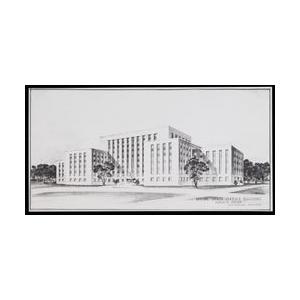 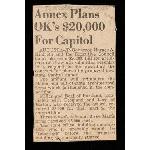