This film begins with a robot arm manipulating some toy blocks on a table. The arm/hand appears to have at least five degrees of freedom. The arm swings horizontally around the post where it is attached, raises and lowers vertically, and extends or contracts horizontally; thus it can put its "hand" anywhere in 3-space. The hand consists of two opposed graspers that open and close. They also rotate around the axis that is the center of the graspers so they can grasp a block in any vertical direction, and the wrist can also rotate around a horizontal axis to put the graspers at an angle other than vertical. The next section is a screen shot of Terry Winograd's SHRDLU program, which combined a natural language interface, a planning program for block manipulations, a simulator, an on-screen display, and a question-answering program that can explain the (simulated) robot's actions. The final section shows someone sitting at the console of a PDP-6 or PDP-10 that has the old AI Lab's DEC circular-screen vector graphics display playing chess (most likely Rick Greenblatt's program). 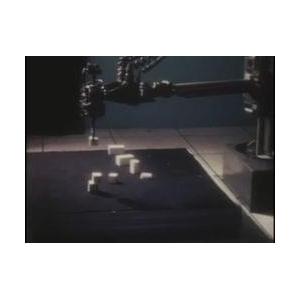 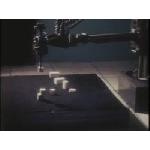 audio podcast about this video